Hearing Vs. Listening; Why Every Couple Should Know The Difference

I have another blog for my business where I write and teach about all things related to music ministry. One of the biggest areas people struggle with is harmony. Because training your ear is a very important part of learning how to listen to and break down harmony, I wrote an article once about the difference between listening vs. hearing.

I was explaining in the piece, that at any given time we are all hearing things we’re really not listening to. Our ears are perceiving the sound, but the sound doesn’t have our attention. So it’s background noise, basically. We’re not really listening to a thing until we are giving it some level of importance or value. That’s really the difference between listening and hearing; the amount of value you’re giving it.

So anyway, I go on to give a couple of examples of how you can instantly switch your mind and your ears from hearing something to listening to it simply by focusing on it. Say you’re watching tv one Summer day, and your child is outside playing with a group of other kids. You can hear them all laughing and playing, but you’re listening to the tv.

So the article was really about training your ear to hear different harmonic parts in a song by learning to focus in on any one part of the song you’re trying to listen to. But one of my readers wrote me a letter after reading that article that blew my mind. He started out by saying “I know this article was about music, but I think you may have just saved my marriage”. 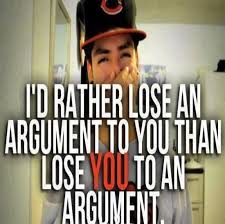 He went on to explain that the article finally made him understand something that his wife had said to him often. Simply that he hears her but he doesn’t listen to her. He told me that after reading the article he was near tears realizing all the times he was just hearing her voice and responding, not really listening- not really “giving value”- to what she was saying.

The truth is most arguments go that way don’t they? Think about it. When we’re angry what’s the goal? To get our point across. To “win”, so-to-speak. Not to listen to the other person. There’s no better proof of that than the fact that most of the time we can’t even wait until the other person is finished speaking to begin speaking ourselves. We are anxious to make our point, so much so that what the other person is saying “has no value” at the moment.  So we hear them speaking but we aren’t listening.

We don’t really respond to each other do we? It’s more like talking at each other. We reply but only for the sake of retaliation. Seldom in an argument is anyone really “listening” to the other person. How can we be, when we’re both speaking at the same time?

When you think about it disagreements can be a powerful learning tool for couples. They are great opportunities to actually learn how to love your mate better; if we would listen to what we hear. It must also be said though, that disagreeing effectively requires not only learning how to listen but learning how to communicate your point.

I read once that the proper way to do that is not to attack the person with blame, but to seek to help the person understand how whatever happened made you feel. “When you do this or say this it makes me feel like this”. The other person then should validate what the person said by making sure they understood it: “so I what I hear you saying is that when I do or say xyz it makes you feel abc.”

Ok, so there’s that text-book BS, then there’s real life. LOL! Let’s be honest, it ain’t gonna go that way for most people. But I think the one thing we can all get out of this is that disagreements between a loving couple shouldn’t be reduced to nothing more than blame games and “hurt-me-hurt-you” matches.

I really do believe that a couple who really loves each other and wants to stay in love must deliberately make the effort to keep growing and learning how to love each other. That means learning the things they like, and the things that make them feel bad. And responding in kind. The problem is most of us love people the way WE want to love them and not the way they NEED to be loved.

If you come to me and tell me that something I do makes you feel bad, I can do two things;  I can get angry, irritated and defensive, then go on the attack, shooting things back at you that YOU do. Or I can seek to understand why it makes you feel that way. I can give value and importance to what you’re feeling. I may not agree, or think there was anything wrong with what I did or said. And that’s where most of us dig in and mount our defense.

But that’s an argument you lose by winning. We’ll never fully understand how to make each other happy until we really learn the difference between hearing your mate’s voice as “background noise” that’s happening while you make your point, and listening to your mate as he or she tells you something that will really help you understand them better. Whether we agree with what they say or not, we have to at least assign some kind of value to what they’re saying. Otherwise we simply aren’t listening to them at all.

If you want to read even more on the subject I found a really great article titled 10 Reasons You Don’t Listen. Great read.

Till next time,
Ron

Tagged arguing, couples, fighting fair, how to disagree agreeably, how to listen to your mate, marriage, relationships, understanding your mate. Bookmark the permalink.

2 Responses to Hearing Vs. Listening; Why Every Couple Should Know The Difference