How a Bookshelf Taught Me A Valuable Life Lesson

I’m always looking for things I can learn from every day experiences. They’re really just for me. I only share them occasionally because someone else might just get a revelation from it too.

This weekend I moved from a one bedroom apartment in a fairly updated community to a smaller one bedroom in a definitely NOT updated community. This place is old, and it shows. But it was all about the money this time, and saving as much of it as possible. In fact I was determined not to let cosmetic, superficial things that were important enough to pay more for the last time sway my decision this time. So I moved into a place that I might not have moved into otherwise at a different time in my life, based on outside cosmetics alone. This place would save me almost $200 over what I was paying at the old place, so I went for it.

When I finally got all my stuff there and started really getting a good look at the place I’d be living, I wasn’t feeling it. The age was showing inside too. Old appliances. A layout that just wasn’t very well planned. Little things not working. In other words it just wasn’t my old place. That happens though, when you’re comparing something new to something you had before. You can’t see the new thing for what it really is or appreciate the potential it really has. Hmm. Another lesson just realized, and that wasn’t even the one I wanted to tell you about, lol!

So anyway, all my stuff is in there and I’m not liking the living room at all. No matter how I arrange things it just felt cramped to me. Not comfortable, no real sense of an organized space. Frustrated. One of the problems I was having was this large bookshelf. It kinda worked in the other space but here it just seem way too big. But I had everything stuffed into the space the best way I could and was trying to make the best of it.

My girlfriend came over to help me unpack everything and get settled in. Immediately she started getting ideas, seeing potential I was too frustrated at the moment to see, and going to work adding that touch only a woman can add. So I was expressing my challenges with the living room with her and just sharing ideas I had to make it more livable. “If I could get rid of this huge bookshelf and maybe replace it with a nice little entertainment center I think that would make a difference and really pull the space together. It would make more room in here.” 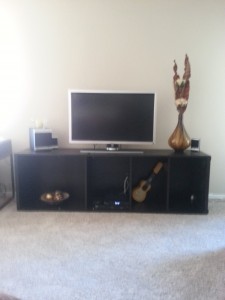 “Babe”, she said, looking at me with eyes that suggested I was trying to do so much that I was missing the obvious “you don’t have to buy an entertainment center, you can make one”. Oh that’ll be nice and ghetto, I thought to myself. LOL. But then she suggested I just take the bookshelf, turn it on it’s side and put the tv on top of it. Then place whatever I wanted underneath.

I hated the idea. I couldn’t see it. The tv will be too low. It won’t look good. I just don’t like the idea. She kept patiently listening to all my objections and replying “let’s just try it babe”. So, with a look on my face that made it obvious I really didn’t want to, I agreed and we made the changes. The results were amazing. I couldn’t believe how beautiful it looked and how much it opened up the space. It made the room look bigger, made the tv looked bigger, changed my whole attitude about the apartment, and just made me feel instantly at home.

I couldn’t stop praising her for the idea and thanking her for just patiently persisting that we try it anyway. And that’s really the lesson I took from the whole experience. Sometimes we can be so absolutely sure something won’t work-no matter what aspect of our life it is- that we’re not open to even giving it a shot. Even in cases like this one, where giving it a chance would cost us nothing. What I took away from this experience is to never completely close myself off to an idea from someone else without at least openly considering it. Often a fresh set of eyes brings a completely different perspective to a situation that you’ll never be able to see on your own because you’re simply too close to it.