My Review Of The Zuri Lounge In Arlington, Tx

My girlfriend and I don’t get out as much as we’d like. We’been trying to fix that here lately, and in the process looking for a couple of places we can call “our own”, so-to-speak. We had a rare opportunity where everything lined up with our schedules (and my money, lol) so we could get out and enjoy a nice evening together.

I’d been talking about going somewhere and enjoying some live music for some time, so after a couple of people recommended the place I decided we’d go to the Zuri Lounge, located at 117 S. Watson Rd. (highway 360) in Arlington, Tx.  I’d heard some good things about the place so I went into the experience with a positive attitude. I knew it was a popular spot so I wanted to reserve a table. After several hours of calling without an answer, we decided to go there in person since it was very close to where I live.

Right away we were both struck by how nice the place is. A flight of stairs leads up to the main lounge. Inside there were several very plush VIP booths and other seating areas. It was really nice, but it did seem a bit small to me.

A gentleman saw us come in and asked if he could help us, so I explained to him that I was trying to reserve a table for later on that night to see some live music.  The gentleman explained that to reserve a table for two would cost us $20, which I needed to pay for right then (larger tables cost even more). Now I’ve made lots of reservations but I’ve never been charged before. So this kinda threw me off, but ok. $20 and we’re good, plus we have guaranteed seats. 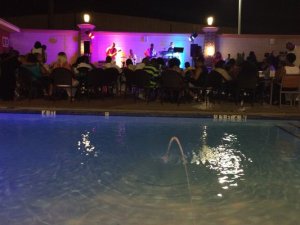 He takes us outside to this pool area with seating all around it, a fully stocked bar and a nice stage area for the band. We’d be sitting at a table right up near the stage. We were excited and couldn’t wait to come back.

So later on that night we come back, ready to enjoy our evening out. I decided to valet, as the walk from the self-parking area was a little longer than I wanted my girlfriend to have to do in her heels.  We paid $10 to valet.

Now, the gentleman who took our reservation earlier told us there was no need to go back up the stairs to the inside, and that we could go right to our table later. So when we arrived we start walking straight to the pool area.  Just then one of the staff members flags us down and tells us we needed to come up the stairs to pay the cover charge.

Cover Charge?? “But we already paid $20 to reserve a table”, I explained to her. “We still have to pay a cover charge too?” “Only one of you can get in free”, she says. Then she proceeded to give us two different colored wrist-bands, then charge me another $10 to get into the pool area.

So we’re out $40 and we haven’t even actually gone in yet.

So anyway, believe it or not my girlfriend and I were still feeling good. It’s a good-looking place, and it was a beautiful night. The vibe was just what we wanted, and we were about to sit back and enjoy some live music. Let’s get some drinks!

I order a Jack and Coke. My girlfriend ask the server to recommend something sweet. She recommended some drink with an exotic name and several flavored liqueurs as ingredients. We could both picture this being one of those tall drinks that come in the glass that gets skinny in the middle and wide at the top and bottom. I thought mine would come in a shorter, wide glass.

When the server arrived with our drinks we both looked at each other in shock. They were both in two very small plastic cups. I’m talking the kind of plastic cup you get when someone is “serving refreshments” after church or a meeting and they give you those little tuna triangles and that little tiny cup of punch. Not the red ones. That little clear plastic one. Yeah, that cup, full of ice. My drink was $8, hers was $9. and both were in the same cup.

All told, after $40 in fees before we even reached our table, two drinks each totaling $34, plus food, I ended up spending over $90.

So overall, while this is a great looking place with a nice vibe, we won’t be going back. I’m not a cheap person by a long shot. But I don’t like to feel like I’m being charged a premium price for a “cheap” experience. I’ll be the first to admit that I don’t go clubbing and haven’t been to one in years. But I’ve reserved lots of tables in my life and I’ve never been charged anything to do so. You have a certain amount of time to get there and if you’re not there within that time you lose your table, simple as that. Still, I wouldn’t have minded that at all if the place hadn’t charged us a premium for the table then charged us AGAIN to get in.

And the drinks to me were unacceptable. To bring a drink out that small and charge premium prices just seemed like price gouging to me. Then the drinks were weak at that. So in a small plastic cup like that full of ice, we might be talking about an ounce or so of liqueur, if that. I’ve heard lots of good thing about this place, so I’m thinking your experience may largely depend on when you go. Our adventure was a Saturday night, and we didn’t go into the lounge area at all, as we were told that’s where the “club” atmosphere is; 25 and older.

In hindsight I could have passed on the valet and perhaps just took our chances with first-come-first-served seating. That would have saved me all of $30 though. I suppose if you come here for happy hour or something like that you’d have an entirely different experience, as the drinks are cheaper, no need to valet or to reserve a table. I understand there’s a karaoke thing happening on Sunday nights too with no cover.  So while we won’t go back, I won’t tell you not to. This place gets a lot of positive reviews. Our experience though, simply didn’t match up to the price tag.